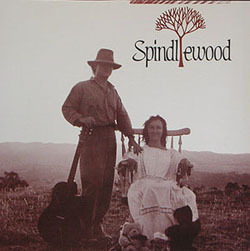 ****
In 1987, the Canberra-based duo of Wayne Collins and Cathleen Moran, cut the first Spindlewood album featuring a mix of traditional and authored folk songs (there are even three tracks available for Child Ballad collectors). They were aided in this by a number of musicians variously providing backing on the twelve album tracks and also by Bob Hefner as lead vocalist on “Hard Times”. (participants listed in the LP artwork). There have been two subsequent albums by a much enlarged Spindlewood but this album has long been “out of print” and unavailable for purchase. Cathleen Moran now goes by the name of Jesse Rowan and web details are available under that name.

This is a delightful LP with strong performances both vocally and musically by all participants. There are two covers of Australian authored works namely Eric Bogle’s “Safe in the Harbour” and Judy Small’s “Mary Parker’s Lament”.
—Paul the Stockman

The album was released in July 1988 at The Albert Hall in Canberra, at a Monaro Folk Music Society Bushdance.

The album was declared Album of the Year at the Canberra Media and Music Awards, “recognizing excellence, creativity and innovation”.
—mcgee-flutes.com