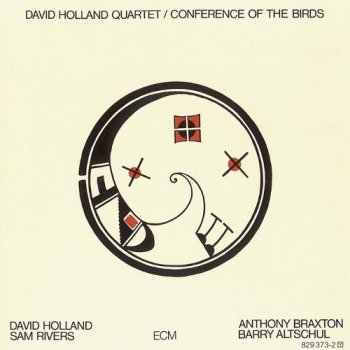 While living in London I had an apartment with a small garden.

During the summer around 4 or 5 o’clock in the morning, just as the day began, birds would gather here one by one and sing together, each declaring its freedom in song.

It is my wish to share this same spirit with other musicians and communicate it to the people.
~Dave Holland

Conference of the Birds is an album by the Dave Holland Quartet, recorded in 1972 and released in 1973.

It is jazz bassist Holland’s second collaboration with composer and saxophonist Anthony Braxton, as well as his second album on ECM Records.

The liner notes describe how birds would congregate each morning outside Holland’s London apartment and join with one another in song.

Holland’s compositions for the album had been performed at a New York City concert by a group including Randy Brecker on trumpet, Michael Brecker on tenor sax, Ralph Towner on guitar, Holland on bass, and Barry Altschul on percussion; “Braxton and Rivers, however, were chosen for the recording as better able to respond to the opportunist disjunctions offered within Holland’s compositions.”

Each piece on the album is “open form,” with a theme stated at the beginning to set key, tempo, and mood.

The players are then free to improvise in whatever direction they choose.

Stuart Nicholson writes: “Conference of the Birds emerged as a definitive statement of swinging free expression. It was, in essence, a return to the rugged discipline of early 1960s free improvising by working off melodic foundations using the ‘time, no changes’ principle to achieve greater control over that elusive quarry, freedom.”
~[Wkipedia-June, 2013]