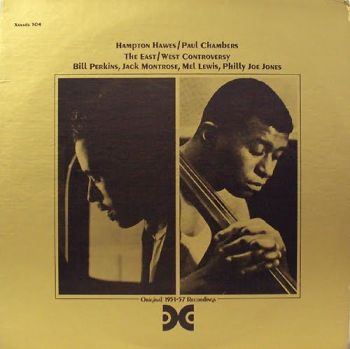 There is nothing too controversial about the pair of sets that comprise this Xanadu LP, which finds musicians identified with East Coast and West Coast styles playing with each other.

Pianist Hampton Hawes (making his recording debut as a leader) performs six blues and bop standards in 1951 and is in already fairly mature form.

The second half of the album (released for the first time on this 1975 LP) has bassist Paul Chambers directing a quintet arranged by John Graas and featuring the tenors of Bill Perkins and Jack Montrose, pianist Paul Moer and either Mel Lewis or Philly Joe Jones on drums.

The cool-toned bop music is quite enjoyable and it seems odd that it took 18 years for it to be released.
~Scott Yanow[allmusic.com]